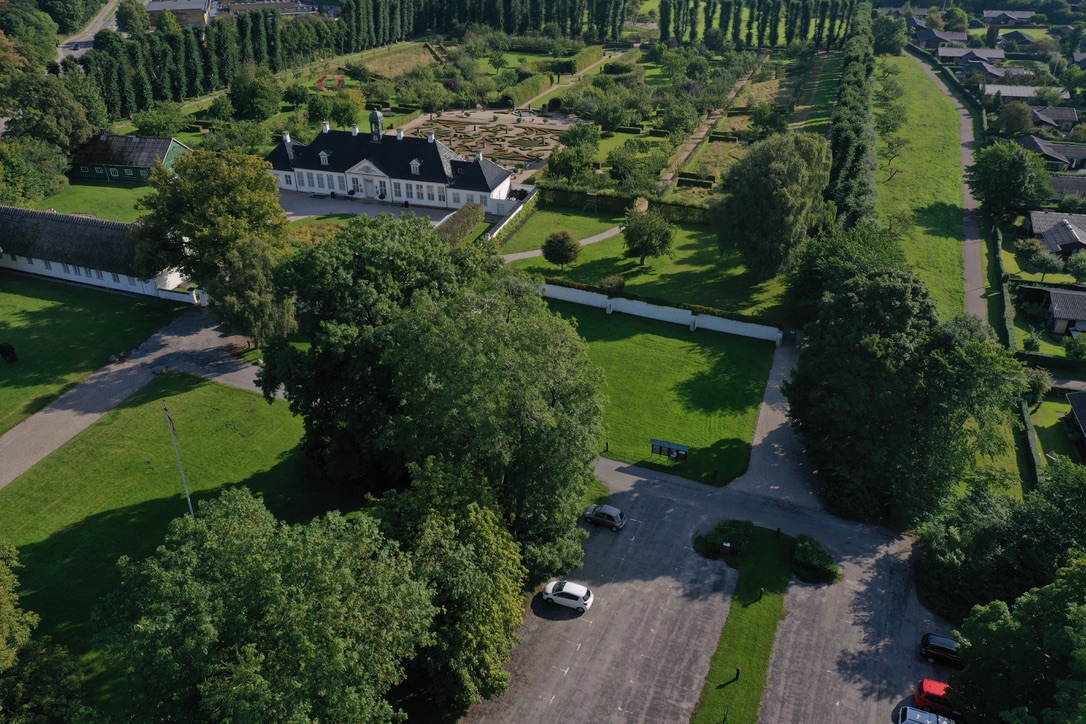 A series of workshops, launching points for exploring filmic research methodologies with the drone and on-ground filming has resulted in five cinematic chapters with five different voices that together makes up a short film on the landscape around Gl. Holtegaard, on transistions, on cyborgs, on drone filming, on on-ground filming, on caretaking and about experimental research methodologies.

It culminates at the screening and panel event TOUCH: FILM SCREENINGS ANDDEBATE ON ARTISTIC RESEARCH PRACTICES FOR A SUSTAINABLE FUTURE on October 12th at the CAFx festival: https://www.cafx.dk/event/touch-film-screenings-and-debate-on-artistic-research-practices-for-a-sustainable-future

Film and sound creates awareness through tangible or imaginary visions and can thereby suggest alternative forms of knowledge and action in architecture. This event combines an introduction to artist Jakob Kirkegaard’s work, screenings of recent co-creative film work and a conversation about the film medium –including drone footage – as a means for exploration, collaboration and reflection.

Using Film as an Affective Resonance Medium to Explore Changing Landscapesof Care, Use and Exploitation‍
Explorative Workshops at Gl. Holtegaard and IGN August-October 2021 in collaboration with CAFx 2021’Landscapes of Care’

Feminist scholars have long addressed the possibility of a different ethics of care, one that cannot be untied from one’s bodily or cultural context, or from the constraints on ability and opportunity that this context imposes. This includes care for nonhuman realms, thereby challenging anthropocentric notions of care. The work of scholars such as Maria Puig de laBellacasa, Karan Barad and Donna Haraway, which we draw on this workshop, expresses an interest in care for non-human worlds and systems - what could also be called a posthuman interest in the relationship between humans and nature. This line of thinking is an opportunity to think about sustainable development in a more holistic and less anthropocentric way, but it also raises some dilemmas in relation to whether we want / can level out the relationship between humans and nature ontologically, or whether we should seek some more differentiated models, and what responsibilities we as human beings posit in this context (more specifically as part of a Western, modernized and industrialized context). In a series of workshops, we use Gl. Holtegård and the area around the former estate, now a contemporary art museum, as a vehicle to explore these issues. The areas allow us to back in history and investigate different models for the relationship between humans and nature / landscape, because it is a place where people have lived with and related spatially to nature on different ways through 7000 years.

Using drone filming as a tool, combined with on-ground filming, we can explore this interaction on a large scale with different points of impact, such as

1) looking for traces in the landscape of the now disappeared Vedbæk Fjord and the settlement structure in the warm climate of the Stone Age,
2) examine the Baroque Garden's symbolic topography as a landscape cosmological and political power statement and form of representation,
3) the surrounding welfare landscape as an expression of industrial culture's flat and resource-intensive welfare city 'for people' – i.g. a humanistic project, but also a project where other species and systems pay the price for human welfare so to speak, and
4) the present landscape treatment and management of the protected lake, stream and forest landscape around Attemosevej appointed as Søllerød Naturpark, where Mølleøen is connected over Søengen to Søllerød Sø. The forest developments stretch into a denser forest in relationship with the wet low-lying meadows along Mølleåen leading to Søllerød Sø. The dense and intense forest experience embeds and connects one to living matter and history.

We use film as an affective resonance medium to explore changing forms of care, use and/or exploitation of the landscape through onsite filming followed with postproduction. Our aim is to create an explorative cinematic research format and a temporal and spatial narrative about these changing conditions visible in the landscape around the site and ask questions about how this narrative about human activity in the area provides an opportunity to formulate alternative visions for or statements about how we should show care for the landscape - animals, humans, plants, ecosystems - in a more sustainable way in the future.

The explorative cinematic research format combines our filming onsite at Gl. Holtegaard, with statements brought together in a filmic output in an interaction / counterplay with the selected literature and with Jesper Just's exhibition 'Seminar' (in Latin: nursery, educational institution, seminar where new knowledge is gained) which explores interactions between body, plant and artificial life: https://www.youtube.com/watch?v=TC-PvlBiK-A

‍
The focus is on relationships between different scales (from micro to macro) that characterize the site and the landscape context, and the human experience of it through media: the baroque garden, the urban and nature/landscape surroundings and a sensory and affective experience of it.

_Output
We aim to produce a final exploratory (research) film with a raw, quickly clipped aesthetics.

We prepare film, text for overlay and soundtracks with text reading and drafts a rough guideline based on selected themes at and between our three work meetings (June 15th., August 10, and August 23 3, towards workshop 1, Monday August 30 in order to plan our filming and postediting.

Monday the 30th of August at workshop 1 we sense and experience the surroundings and place through hiking and filming onsite with drones and film cameras.
The Gl. Holtegaard footage we may combine with voice over of text readings or text overlay on the moving images.
After workshop 1, we have 1.5 days to cut together material for a 1st raw explorative film, which we then show and discuss with Hugh Campbell and Anne Spirn at workshop 2, Wednesday September 1st. We record workshop 2. After workshop 2 we sum up and make plans for the postproduction.
Then we cut the first raw film into a 2nd raw cut film. Statements can also be added as text on the moving images, if that supports the explorative visual film.
At workshop 3, October 4 at workshop 3 the new films(film) are discussed with Anne Spirn and Hugh Campbell.  After final editing the film is shared with event and panel participants artist Jacob Kirkegaard and researcher Igea Troiani.

It culminates at the CAFxTOUCH: FILM SCREENINGS ANDDEBATE ON ARTISTIC RESEARCH PRACTICES FOR A SUSTAINABLE FUTURE on
screening and panel debate October 12 2021
‍

The research format of the work, the cinematic product, and the affective and mediating approach to awareness of the impact of landscapes and technology and their significance for future understanding and action are discussed as care practice and world embedding approaches in (landscape architecture) artistic practice, research and teaching.